Yeah, so I didn’t bounce, that was the problem. 11 days ago this evening, I was in A & E at Frimley Park, waiting to be seen. I waited three hours from arrival and admission until a friendly nurse came to dose me up on painkillers and organise my trip to X ray.

What had led me there was a stumble while playing netball. Heavy legs were recovering from a 5km run the day before and three weeks off prior to that following an infected fly bite. My sluggish legs couldn’t quite respond when I spun and lunged for the ball. The ball bounced away into another player’s hands. I crashed to the ground. I still don’t remember exactly how I landed, only that fraction of a second where I was aware I was about to fall and I recall thinking ‘Don’t crack your head on the tarmac!’. So instead I landed heavily on my elbow and upper arm, and there was a definite ‘pop’ as I crumpled to the ground and rolled slightly onto my back.

Play was moved to another court and a kind group of volunteers stayed with me while my husband was called and, once it was established that I couldn’t stand up, an ambulance too. As I sat leaning against another player’s legs, I cradled my left arm and my team mates took a look at the damage, fetching ice packs. The expression on their faces told me that it must be pretty bad – but I wasn’t sure, and neither were they, whether I’d broken a bone, my elbow, my wrist, or dislocated my shoulder.

Five hours later the picture became clear, but not before I’d endured torture at the hands of the radiographer. She needed her angle. I couldn’t let go of my lower arm. She needed me to hold my hand flat. I couldn’t twist it. I cried. She must see it all the time. Maybe not a silly 50 year old woman in a too-tight netball dress, perhaps. The dress and t shirt I’d been wearing had to be cut away at the shoulder so the paramedics could tend to me. Later, it had to be cut off completely and chucked in the bin.

Turns out Monday is the busiest night of the week at Frimley A & E. Two people told us this – the first was the paramedic who brought me in (he was brilliant, but I did ask him why they couldn’t fit better suspension on ambulances – I’d had to suck on the gas and air over every bump in the road and round every roundabout, even though they’d driven sedately). His hypothesis – later reiterated by a Samaritans volunteer who popped his head in for a chat – is that people get injured and ill over the weekend but hang on til Monday to check it out with the GP before reporting to hospital with their minor injuries or conditions requiring admission.

Luckily I had Geoff there with me. Because of this, we were left alone once being found a room to wait in. No-one came to give me any more pain relief, but I could have asked Geoff to go and request some if needed. It was just a long, boring wait. We played i-Spy. As it approached midnight I exhorted Geoff to head home for some rest. I thought I might be up most of the night awaiting attention – but I didn’t know about the dashboard which would show me as red after 3 hours. Geoff insisted on waiting – since he thought once I was x rayed he’d have better information about how long I was likely to take before being allowed home. 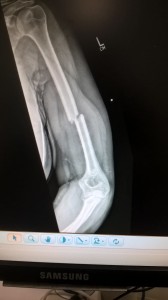 In the event it all happened quickly just after 1 am. I was wheeled to x-ray by the gentlest porter in the world, screeched in pain at the hands of the x ray woman, then wheeled back. The doctor came in soon afterwards and the image was flashed up on screen. A nice, clean, but total fracture of my humerus, mid-shaft and displaced – which explained why the side of my arm was bulging like Popeye’s.

The nurse, Dan, squeezed a dose of Oramorph into my mouth before telling me the bad news. He was going to fit me with a collar and cuff sling and it was probably going to hurt. No casts are applied for upper limb fractures, above the elbow or above the knee. My fracture was unlikely to need pinning – although the doctor promised to call in the morning after review with colleagues. The ‘conservative’ approach is preferred for bone setting wherever possible, rather than surgery. This meant I would most likely be left with my arm in a simple collar and cuff strap to allow the bones to align naturally, and sent home with an array of painkillers.

After an initial false start, during which my arm muscle blew up and twitched in spasm due to the angle of the bone at that time, with Nurse Dan telling me to ‘Stop doing that’, to which I, panicking, yelled ‘I’m not doing anything!’, the collar and cuff sling was finally fitted. It was comfy enough, and Dan’s good advice to ‘relax, breathe, and let gravity do its thing’ has stood me in good stead repeatedly since.

View all posts by k4thybrown