Everyone knows time speeds up as you get older. There’s a theory that this occurs because every unit of time is progressively smaller in relation to one’s lifespan already lived. For a five-year-old child the wait until their next birthday seems interminable – it’s approaching one fifth of their life lived to date. At 60 years old, a year is only 1/61st to 1/60th of a life lived.

Whyever it happens, as we get older we usually wish time would do us a favour and just slow down a bit. We tell ourselves to enjoy every moment, as the birthdays accelerate relentlessly towards us. Where have the last few years gone?… “You think it’s bad at 50?” exclaims my dad, “Wait til you’re 70!”.

So with a fractured limb, it seems somehow wrong to be wishing time away. How wicked at my time of life, when every leaking moment is so precious! But <whinge> everything sounds so far away: 2 weeks until the next X-ray; 4 weeks until the bones start to knit; 2 months until the splint can be removed; 3 months til you can drive again; 6 months to get back to running fitness; over a year to do weight-bearing exercise… And so on. The physio is going to drag on endlessly… </whinge>.

And yet, here’s where age-time-relativity (not a thing) kicks in: because with a broken arm, time is whizzing by. Since every single thing takes ages to complete with one damaged arm, before you know it, another day is over. Typing: one hand flying around the keypad, no matter how adroitly, is slow-going compared to two. More mistakes need to be corrected, some key combinations take a bit of working out to achieve. Unpacking the dishwasher one item at a time. Taking a shower…. Sheesh!

In fact I now wonder if that’s why time goes so fast for old folk. Because they can only fit a fraction of the tasks into one day that younger people can.

So I’ll simply take my time with everything. Hopefully I’ll be better in double-quick time!

Pain management is tricky! I was sent home from hospital with paracetamol, Naproxen (a stronger NSAID than ibuprofen) and codeine phosphate. The nurse said as he handed me my party bag, “Your GP may be able to get you something stronger if you need. This is all we can prescribe from here”. I was intrigued and a little nervous, this already seemed like a lot.

No point in being brave

I know from previous experience what it’s like when regular painkillers are not enough. When I bruised my rib a few years ago they told me two things of interest.

It’s very important however not to overdose on the various painkillers. Taking more than recommended can do irreparable internal damage. In the case of codeine you also have to consider its addictive qualities. You are advised not to take for more than 72 hours, however in the case of acute need like a fracture there doesn’t seem any problem with getting a week’s worth to see you through the worst of it.

Paracetamol relieves mild to moderate pain and reduces fever. It doesn’t reduce inflammation or address the cause of the pain, but it works fast. It’s usually the first resort. But you should only take up to 4g a day (four doses of up to 1000mg).

Non-steroidal anti-inflammatory drugs (NSAIDs) equally address mild to moderate pain but also work to inhibit inflammation. Example types are Ibuprofen, Naproxen and Aspirin. Aspirin is also used to prevent blood clots so is taken preventatively by some people. NSAIDs have side effects though – they can cause thinning and erosion of the stomach lining and bowel, so recommended dosage is limited to 1.6g a day (4 doses of 400mg).

If you are clear to take ibuprofen you can alternate doses with paracetamol to give you good mild to moderate pain cover over the entire day and night and continue this as long as you need. A slight complication is that ibuprofen ideally needs to be taken with or after food to help prevent irritation of digestive system.

A note about anti-inflamms and fractures

There is some evidence that taking NSAIDs in the first fortnight is counter-productive because inflammation is part of the natural healing process. I asked the consultant about this at my two-week appointment and he agreed, but said it was too late as it was more than two weeks gone. I guess we’ll see at the next fracture clinic/x-ray whether the union process has begun as it should. I think the nurse and doctor in A&E should have let us know about this when we were discharged.

Opioids are the next step up. These are divided into weak and strong types: you are only likely to need the stronger ones at the outset of treatment, or at moments where enhanced pain management is needed over a short time-frame, eg if your broken limb needed to be manipulated for some purpose. Hence being given Oramorph by mouth just before my first x-ray.

Codeine is a mild opioid. So it’s available on prescription to help augment your pain relief if paracetamol and ibuprofen are not enough. Downsides of codeine are sleepiness, and that it makes your digestive tract sluggish too… So you are bound to get constipation.

So, managing the pain day-to-day becomes a juggling act of scheduling paracetamol, ibuprofen and codeine. A system is good for this. If, like me, you’re also taking other supplements and unrelated medication it becomes tricky to remember what you’ve taken when. More on this later.

To be honest, there is very little pain for most of the time. In the first week there’s the pops, crackles, jolts and spasms of the raw break and inflamed muscles shifting around. Then things settle down and as long as you don’t move wrongly, or too fast, and remember to relax your shoulder and elbow downwards and not tense up, the painkillers keep everything at bay.

Where do the prunes come in?

After three weeks, I wanted to give up the codeine. I’d moved from prescription codeine phosphate to over-the-counter Solpadeine to help me  get through the night. It felt wrong to be on it for so long. Although it was helping me to sleep I didn’t much like the thought of dependency. I’d started to notice feeling headachey with it, a bad sign… And then there was the constipation. I’d been tackling that pre-emptively since day 3 with fruit, dried apricots, and tinned prunes. I was drinking plenty of water too. Later I tried adding in Senna capsules overnight. But the clogging power of codeine is all-powerful. In the end the only way to overcome it was to quit. The effects continued for a week after stopping it. I’m also taking Dulcolax stool softeners and overnight caps now and finally getting back to normal but still can’t take anything for granted. So prunes and fruit it is, whenever I can. 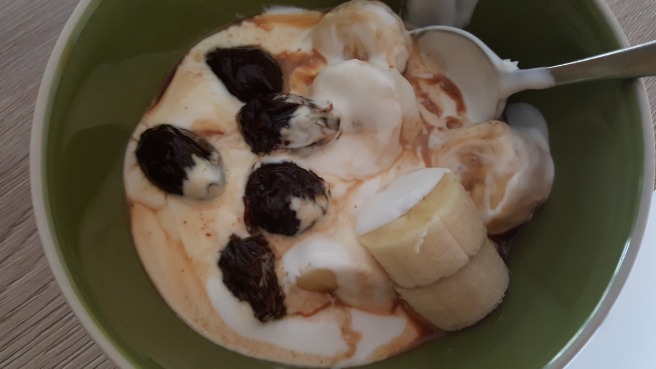 Back to pain. This sounds really stupid but the weird thing I realised after three weeks was that the painkillers had  been working effectively all along (duh!). All the time I thought the broken arm didn’t really hurt much it was because the pain was masked successfully. So as I left the codeine behind and tried extending periods between paracetamol and ibuprofen doses, I would suddenly notice that my arm felt ridiculously sore, stiff and heavy. It felt especially sore along the forearm and at the wrist where it was resting on the cuff of the sling. I would try to relax to no avail. Only paracetamol would relieve the feeling. Of course without codeine I am now down to juggling just paracetamol and ibuprofen all day, and the real trick here is to space them out and not miss doses. If I go too long I get what I now recognise as the ache of the broken arm, but also the referred pain of ligaments and muscles, not just along my arm and in my elbow, but elsewhere… Neck, shoulder, hips and back from sleeping in the same position so much, and now also sore knee ligaments, from inactivity I presume.

A good way to manage this regular and effective dosing without going over the top is to make yourself a chart to tick off. Or perhaps a tray with a sheet of paper on it, laying out your meds at the beginning of each day so you can see what you’ve taken so far. I’m at day 27 now so this is what I’m going to be doing from now on.

Now, tell me about your pain and how you’ve coped with it.